Yes, spectacular and witty title to this post.  Life has been busy.  So busy that I haven't been able to even touch the sewing machine in months.  I have stuff cut out, but just haven't had the time or energy to drag them out.  Skiing is taking up a lot of my time as are the two courses, work and all the other stuff that seems to come my way.  At least I'm not bored :)

While there hasn't been any sewing, there has been knitting.  I think I've been gravitating to knitting because it is very portable and meditative for me.  For a while I was knitting only stockinette stitch socks (which for those who knit know is just the knit stitch over and over and over...and over again).   Like I said, meditative.  Though recently, I'm being pulled towards socks with texture and interest again.  And I am finding I *can* actually knit on those types of socks when it is not completely quiet around me, and I can even take them with me to knit night!

These socks are my international travelling socks - knit on planes from Toronto to Chicago, Chicago to Salt Lake City, Salt Lake City to Denver, and Denver to Toronto.  They are also my sick on the couch socks after I got back from my trip.  I just have to add that I absolutely love Opal.  It is so colourful, it feels great when knitting, it's not splitty at all, and it wears like iron.

These are another pair of sick-at-home socks.  I cast on and knit the first one in ONE DAY.  I know!!!  Crazy, right? ONE DAY.  The second sock took a little longer, but I finished the pair in under a week.

Here's a pair that had been languishing, but are now finished (as of this morning): 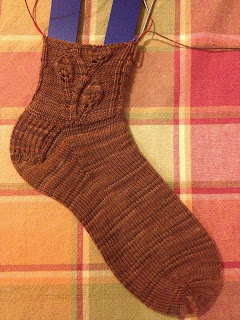 Rav Link for Bees and Blossoms

These were a great knit, and the pair that opened me up to including pattern and texture in my knitting instead of plain vanilla.  I figure if I could do these at knit night, then I'm sure  I can do other patterns too.  These are a birthday gift for someone who I love dearly, and I know she'll appreciate them!!

On the needles - I'm working on the Temperance socks for my sister for her birthday, which also happens to be at the end of the month.  If I can get them done, I can give them to her in person (she lives in Vancouver but will be home for a few weeks visiting).  I cast these on last night and am really enjoying the knitting!

So...the title says Goals.  I need to make some goals for myself, I've just been sort of floating around out there, getting by because it's been so busy.  Ski season will be coming to a close later this month, which will leave me with Friday nights and Saturdays free!  What on earth will I fill my time with???!!

Here are my goals for March: